This lecture will mark the beginning of a partnership agreement between the Mémorial de la Shoah and the EUROM of UB Solidarity Foundation. 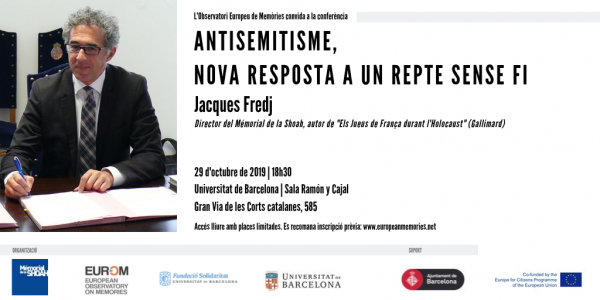 The director of the Mémorial de la Shoah in Paris, Jacques Fredj, will offer, on October 29, 2019 at the University of Barcelona, the conference «Anti-Semitism, new response to a never-ending challenge», in the framework of the signing of a collaboration agreement between the Mémorial de la Shoah and the European Observatory on Memories (EUROM) of the UB Solidarity Foundation.

The event is open to the public and will be held at 6.30 pm at the room Ramón y Cajal of the historical building of the UB (Gran Vía de las Corts Catalanas, 585). Access is free, but places are limited and prior registration is required through this link.

The EUROM – a multidisciplinary and transnational network of public memory policies promoted by the Solidaritat Foundation of the University of Barcelona – and the Mémorial de la Shoah in Paris will formalize a collaboration agreement with the aim of promoting the uses of the past to confront current social conflicts, especially racism, xenophobia and anti-Semitism. The agreement consolidates a cooperation that began two years ago with the training of teachers and education professionals in Catalonia and Portugal to discuss in classrooms the issues of the Holocaust, mass genocide and atrocities.

The Mémorial de la Shoah is an active institution in research, documentation, publishing, teaching, training and cultural mediation. Its origins are in a clandestine archive created in 1943 by the industrialist of Russian origin and member of the resistance Isaac Schneersohn with the aim of gathering evidences on the persecution of the Jews. Once France was released, the archive became the Contemporary Jewish Documentation Center (CDJC) and was a fundamental piece to support the French declarations in the Nuremberg processes and, subsequently, the trials of those responsible and complicit in the final solution in Germany, France and Israel.

The headquarters of the current Mémorial de la Shoah in Paris were inaugurated in 2005 at the same place where Schneersohn had founded the Memorial to the Unknown Jewish Martyr in 1956. Classified as a historical monument in 1991, in this space stands the Wall of Names, where the names of more than 70.000 Jews deported from France are engraved, and each year hosts the main ceremonies related to the Shoah in the French State. The space also houses the CDJC archive and a library, a permanent exhibition on deportations, temporary exhibitions, and cultural events. In 2012, the Mémorial de la Shoah opened a museum in Drancy, in front of Muette’s former internment camp.

Director of the CDJC since 1992 and of the Memorial to the Unknown Jewish Martyr since 1996, and current director of the Mémorial de la Shoah in Paris, Historian Jacques Fredj is the author of Les Juifs de France dans la Shoah (The Jews of France during the Holocaust), a co-edition by Gallimard and the Mémorial de la Shoah, and Drancy, un camp d’internement aux portes de Paris (Drancy, an internment camp at the gates of Paris), published by Privat.

The European Observatory on Memories (EUROM)

Created in 2012 with the support of the European Commission, the European Observatory on Memories (EUROM) is committed to the recognition of the diversity of memories. In this regard, and through the promotion of transdisciplinary, transversal and transnational projects, EUROM aims to identify and analyze the diversity of memorial processes in Europe as well as in other continents; promote the discussion to create representative public policies and contribute to analyzing and managing them; promote the socialization of memorialist initiatives and real connections between institutions, professionals and researchers. Currently, the network includes 50 institutions and research groups from Europe and America.